The History of the Diocese of Jamaica and the Cayman Islands

On 24 July, 1824 the Diocese of Jamaica, which apart from Jamaica itself included the Bahamas and the then British Honduras (now Belize), was established by Letters Patent by King George the Fourth. Dr. Christopher Lipscombe, who was appointed the Bishop, was consecrated by the Archbishop of Canterbury at Lambeth Palace Chapel on 25 July 1824 and arrived in Jamaica on February 11, 1825.

The Bahamas remained a part of the Jamaican Diocese until its own Diocese was created in 1861, while British Honduras remained under the jurisdiction of the Bishop of Jamaica until 1891. In 2001, the title of the ‘Diocese of Jamaica’ was amended to include ‘and the Cayman Islands’ in recognition of the growth of the Anglican Church in those islands since it came under the formal jurisdiction of Jamaica in the 1960’s.

The Church of England however had been in Jamaica since the conquest of the island from Spain in the seventeenth century. In 1660, after subjugating the Spaniards, the British established civil administration and appointed the first governor. Among his instructions were to give encouragement to ministers “… that shall be sent unto you that Christianity and the Protestant Religion according to the profession of the Church of England may have a due reverence and exercise among you.” There was apparently a delay in implementing this, and it was not until 1664 that the first clergymen arrived in the island which by this time had been divided into seven (7) parishes.

The first church to be established was the church of St Jago de la Vega in Spanish Town and this was built sometime between 1661 and 1664 on the ruins of the Spanish Church of the Red Cross which had been destroyed by the invading British troops between 1655 and 1660. It is this church, rebuilt and enlarged in the 18th and 19th centuries which became the Cathedral of the Diocese of Jamaica in 1843. The Cathedral has national and regional significance as it is not only the oldest Anglican cathedral outside of the British isles, but the site it occupies is perhaps the oldest site of continuous Christian worship in this hemisphere as a church stood on that same spot since approximately 1538.

Prior to the creation of the Diocese of Jamaica, the Church in Jamaica was under the nominal authority of the Bishop of London. . Some Bishops took their responsibilities seriously, but the distance made supervision impossible. This meant that in practice it was controlled by the government authorities in Jamaica which itself was dominated by the planter class. The church was seen as an ally of the slave-owning interest in the region. As the clergy had no effective supervision, discipline was lax and corruption was rife.

The Establishment of the Diocese of Jamaica

This was a situation the British Government could no longer afford to continue, for from the 1820’s as a result of the work of the abolitionists, there was a growing awareness in Britain that slavery was an evil institution and should be abolished. The Government was also concerned at the growing influence which the other denominations were having among the slave population and decided it was time for the Anglican Church, which was the established church, to minister to the slave population. However it realized that it could not do this within the existing ecclesiastical structure as members of the clergy were on the whole, allies of the planter class which controlled both the central and local governments. 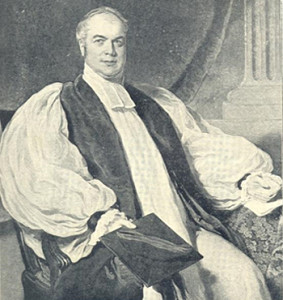 The solution was to establish two dioceses in the region and appoint bishops with no previous ties to the region and to provide them with the necessary funds and authority to carry out their tasks. The Rt. Rev. Christopher Lipscombe was appointed the first bishop of Jamaica which included, apart from Jamaica, the Bahamas and Belize. The Rt. Rev. William Coleridge was appointed Bishop of Barbados.

Bishop Lipscombe was sent to Jamaica with specific instructions to improve the spiritual conditions of the slaves in the hope that this would make them more amenable to their lot in life. In the 19 years of his ministry Bishop Lipscombe ordained 73 deacons and 66 priests, consecrated 31 churches and licensed 41 other buildings for worship. His episcopacy is therefore important as he not only established the Church on a firm footing, but made an attempt to minister to the black and enslaved population of the island.

Bishop Lipscombe died on 4 April 1843 and was succeeded by Bishop Aubrey Spencer, Bishop of Newfoundland. In Bishop Spencer’s letters of appointment, the Parish Church of St Catherine was made into the Cathedral of St. Jago de la Vega. In 1844 Bishop Spencer founded the ‘Jamaica Diocesan Church Society for the Propagation of the Gospel’. He streamlined the structure of the Diocese in 1847, dividing the country into three Archdeaconries corresponding to the three civil counties of Cornwall, Middlesex and Surrey. In 1854 Bishop Spencer became ill and was forced to retire to England.

Dr. Reginald Courtney, Archdeacon of Middlesex was consecrated a bishop on 24 March 1856 and appointed Co-adjuntor Bishop of Jamaica as Bishop Spencer continued to serve as bishop of Jamaica until his death in 1872. In 1861 the size of the Diocese was reduced with the establishment of the Diocese of Nassau which consisted of the Bahamas, the Turks and Caicos Islands.