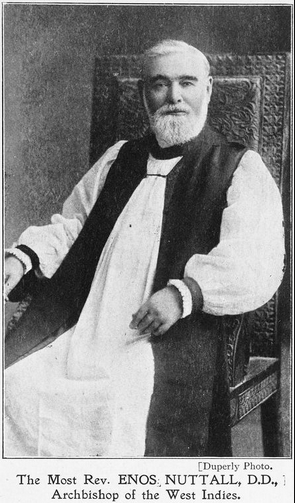 The centenary of the death of Archbishop Enos Nuttall is an opportune time to celebrate his life and his contribution, not only to the Anglican Church in Jamaica and in the wider Province of the West Indies, but to the country as a whole.   H. G deLisser, the influential Editor of The Gleaner said after his death that “he not only dominated the Church of England in Jamaica for many years, but exercised a most powerful influence on the life of Jamaica as a whole.   During the last twenty years of his career – from the age of fifty-four to the age of seventy-four he was certainly the strongest man in the Colony.”   Quoted in Frank Cundall, The Life of Enos Nuttall, London, SPCK, 1922 p 228

It was reported that when Archbishop Nuttall died on May 31, 1916, there was a day of national mourning. His funeral held the next day was said to have been the biggest event witnessed in Jamaica for a long time. Life in Kingston came to a virtual standstill as business were places closed so that their employees could pay their respects to the late Archbishop.

Thousands of persons filed pass his coffin as his body lay in state for five hours at George’s Anglican Church where he had served as clergyman before his election as Bishop.  Thousands more lined the route to watch the funeral procession travel to the Kingston Parish Church for the funeral service, and then through the city to the St. Andrew Parish Church Cemetery where his body was buried. The service itself was attended by dignitaries of church and state.   As the Gleaner report of the event said “It was a funeral the like of which has never been witnessed in this island for a generation.”

Archbishop Nuttall was highly regarded by all sectors of Jamaican society as he was involved in numerous areas of national life, and he was concerned about people’s welfare. In all his activities, he was guided by Christian principles and values and he sought to inculcate these into the members of the society. He was, above all, therefore, a spiritual leader.