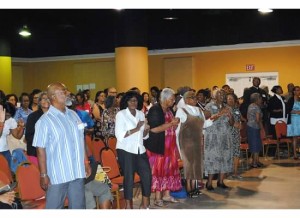 Make Reconciliation And Forgiveness The Mission Of The Church

A call to make reconciliation and forgiveness the real mission of the Church was the recurring message brought by presenters at the 40th annual Healing Conference held recently at the Sunset Jamaica Grande Resort Spa and Conference Centre in Ocho Rios.

The intensive weekend of reflections (May 31–June 2) under the theme “Healed from Violence: Becoming a Kinder and Gentler People,” engaged hundreds of members from Churches across the Diocese; as well as participants from the Diocese of the Bahamas and the Turks and Caicos Islands; the Diocese of Trinidad and Tobago; the United States and the wider ecumenical community.

In the opening address, many-time participant, the Rev. Canon Basil Tynes, from the Bahamas, noted that violence took many forms – emotional, intellectual, physical and structural; and was perpetrated by States, the Church, the socio-economic environment and criminal activity, among other channels. Although peace-building should be the main objective of every congregation, very often the Church stood in the way of this process, he said.

“If we’re going to change the world, it has to start with us… We must recognize that reconciliation is possible through the Grace of God.  It may seem awesome but the Gospel calls us to be radically transformed and to bring people to a new awareness of what it is to live the Gospel,” Canon Tynes asserted.

Keynote presenter and former Moderator of the United Church in Jamaica and the Cayman Islands, the Rev. Oliver Daley, said violence was about brokenness, of both victim and perpetrator; with the Church itself being a broken body wrestling with the ethos of healing in a world dominated by violence. He stated that, through the years, religion had spawned violence and pain, paving the way for hatred and new evil in the form of revenge.

“It (revenge) creates the environment for prejudice, leaving no room for reasoned argument or thought. It has the power to transform, you into what you don’t want to be or into what you are not.”  Quoting the words of the late civil rights leader, Dr. Martin Luther King, Rev. Daley warned that this resulted in “a descending spiral begetting the very thing it seeks to destroy.”

Rev. Daley pointed to the drug trade as an instrument of violence, noting that more people died from the trade than from the use of illicit drugs. He said this highlighted the need for the State to create functional institutions and systems that would deliver justice in a timely manner and also curb the threat of violence.

Urging self-examination by the Church, he noted that religious people were not immune from becoming instruments of violence in their church, homes and communities, and he cited as an example the case of the Pharisees who plotted to kill Jesus. He suggested that, in an effort to become kinder and gentler, Christians should adopt the spiritual attitude and teachings of Jesus, as recorded in the Scriptures. These included treating people’s needs as if they are holy, regardless of the circumstances or status of the persons concerned; directing anger at the
mis-treatment of others and not for oneself; and taking a stand against wrong-doing, instead of being silent perpetrators. Among other examples which Rev. Daley listed were: meeting force with ridicule or humour; seizing the moral initiative when one is tempted to be violent, and taking blows without giving them, as Jesus taught in the Sermon on the Mount.

He identified forgiveness and reconciliation as the next critical steps in becoming kinder and gentler. However, he explained that while forgiveness is unilateral and does not depend on whether the negative conduct has stopped, it requires more than tolerance or disciplined resistance. It means that the offended party remembers the wrong with love, without being controlled by the past hurt. On the other hand, Rev. Daley said, reconciliation is mutual and its primary goals are to achieve peace and justice; to heal memories; and to put shattered lives and relationships back together again.

Other presenters included The Rt. Rev. Laish Boyd, Bishop of the Bahamas and the Turks and Caicos Islands; the Rev. Canon Lloyd Anthony from the USA; the Rt. Rev. Leon Golding, Suffragan Bishop of Montego Bay and the Venerable Philip Isaac who led the delegation from Trinidad and Tobago to its first ever Healing Conference.

The annual Healing Conference which is chaired by the retired Suffragan Bishop of Mandeville, the Rt. Rev. Harold Daniel, culminated with the Holy Eucharist and Laying of Hands at a Service attended by more than 500 persons. Bishop Golding presided at the service, while Bishop Boyd was the preacher.