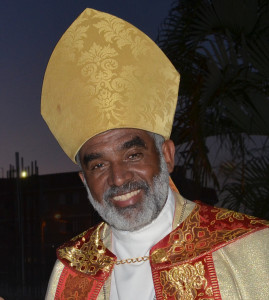 The Rt. Rev. Dr. Robert McLean Thompson – coming originally from Forth William, Westmoreland – received his secondary education at Jamaica College.  Following his call to the ministry of the Church he entered the United Theological College of the West Indies from which he graduated in 1973. He was ordained a priest in 1974. His continuing education included a Masters in Sacred Ministry from  McGill University in 1979 and most recently a Doctor in Ministry – D.Min. – from Episcopal Divinity School, Cambridge, in 2004. He served as Curate at the Church of St. Mary the Virgin, Rector of St. Jude’s, Stony Hill and later St. Andrew Parish Church, Half Way Tree. He was made a Canon of the Cathedral in June 2001. He was elected as the third Suffragan Bishop of Kingston at the Synod of March 2005 and consecrated and ordained in May 2005. He has served on several Boards and Committees including the Council of the Institute of Jamaica and Jamaica Justice Reform. He currently serves on the Board of Kingston College, the YMCA, Kingston Restoration Company, and more recently the Police Service Commission. As a member of the Provincial Synod of the Church in the Province of the West Indies (CPWI) he served for seven years on the Anglican Consultative Council which facilitates cooperative work among the Churches of the worldwide Anglican Communion. Bishop Thompson is married and has two sons Matthew and Joseph.