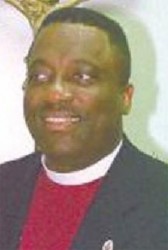 The Provincial Secretary, on behalf of the Archbishop of the West Indies, has issued a statement announcing the death of the Rt. Rev. Cornell Moss, Bishop of Guyana. Bishop Moss died on Saturday May 30, in Miami, Florida where he was recovering from heart surgery

A native of the Bahamas, Bishop Moss trained for the Ministry at Codrington College, Barbados; and subsequently at Nashotah House, Wisconsin, USA. He was ordained a Deacon in 1983 and became a priest in 1984. In 1996, he was appointed Archdeacon of the Northern Bahamas. He was selected as the 7th Bishop of Guyana in August 2009 and was consecrated later that year, on December 8 at St. George’s Cathedral in Georgetown, Guyana. In the brief time he has held this position he has had a tremendous impact on the Diocese of Guyana.

The Diocese of Jamaica and the Cayman Islands joins with the people of Guyana in offering sympathy on the passing of Bishop Moss.