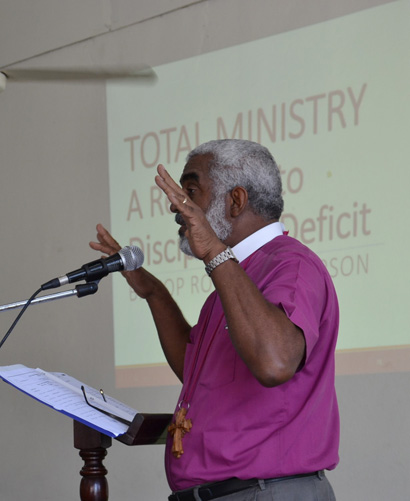 For the fourth year running, the six Anglican Churches in the August Town, Liguanea, Mona and Papine area collaborated to celebrate the Holy Cross Weekend in early September.

The joint activities which were held at The Church of The Ascension, Mona and St. Margaret’s, Liguanea between Friday, September 9 and Sunday September 11, are part of a larger programme being undertaken by the churches, and which has evolved into a Movement known as The Anglican Togetherness Group (ATG.). Through the ATG, the churches have been working together in several areas of Ministry in an effort to achieve their individual and group objectives.

The ATG includes The Church of The Ascension, Mona Heights; The Church of St. Margaret, Liguanea; The Anglican Community that worships at the UWI Chapel; St. Cyprians, August Town; St. Josephs, The Grove; and St. Matthew’s, Jack’s Hill.

Participants in the recent Holy Cross Weekend described it as “a most exciting, educational and spiritually fulfilling experience for members and visitors.” The usual Sunday morning services were held at the various Churches, but the three Rectors were rotated among the congregations.

Each year, the Holy Cross celebrations are focused on a theme or challenge confronting the Anglican Church in Jamaica and the Cayman Islands, as well as ATG member churches. This year, strategies to enhance the making of disciples for the work of Christ were highlighted in workshop sessions on the second day of the Weekend. This as the need for confident messengers to take the word of Christ into the communities served by the ATG has been increasing, given the many challenges in the society.

The Weekend opened with a presentation by the Rev. Michael Allen, Rector of the Church of The Ascension, who explained the main beliefs, theology and practices of Anglicanism and key differences with the Roman Catholic Church. He traced the origins of the Anglican Church in the British Isles (England) and in the Caribbean, in particular in Jamaica. He established that conflicts between the Church in England and the Church in Rome over doctrine and authority existed long before disagreements with the Pope led King Henry VIII to separate the Church of England from papal authority.

In Jamaica, Fr. Allen said the mandate of the Anglican Church, as advocated by the first Diocesan Bishop, the Rt. Rev. Christopher Lipscombe, was to detach the clergy from the planter class; and prepare the slaves for freedom. He highlighted the achievements of Archbishop Enos Nuttall and the first native Bishop, Percival Gibson, both of whom involved the Anglican Church in the nation’s spiritual life through the planting of Churches. They also promoted the social upliftment of the population through programmes in education, skills training, health and agriculture; while often mediating with the political structures.

Fr. Allen concluded that Anglicans have much to celebrate, but much work to do in a world and country where injustice is still rife.

In addressing the issue of making disciples, especially at a time when fewer persons are entering full time ministry, participants in the ATG workshop agreed that much work has to be done by the Laity. Following a presentation by the Rt. Rev. Robert Thompson, Suffragan Bishop of Kingston, regarding the concept of “Total Ministry” in which the laity accepts greater responsibility for the mission of the church, the prospects for adopting this approach were further explored in group discussions. The six congregations have expressed a desire to formally organize themselves using the “Total Ministry” modality.

The ATG has now adopted as its Tagline “ATG: Doing the Work of Christ Better Together.”

ATG Executive Member, Ambassador Byron Blake asserts, “We are convinced that our approach to Ministry could be adapted by other groups of Anglican Churches, especially those in close proximity. This type of partnership is a good way to address some of the challenges facing the Diocese and many of our congregations. We also believe that the sharing of physical assets and community work, even with non-Anglican denominations which support similar Christian principles, can be beneficial.”