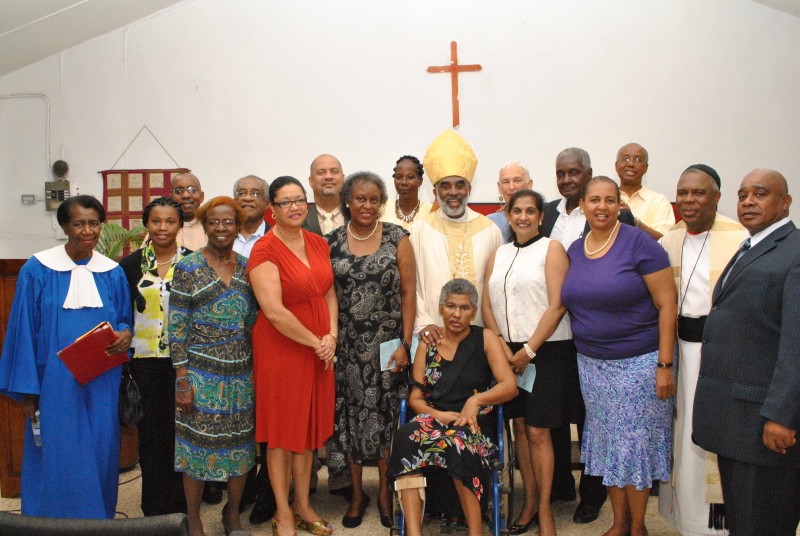 A Mass of Thanksgiving was held on Sunday, September 13 at St. Thomas Mission, Majesty Gardens, to commemorate the 50th Anniversary of the St. Andrew Settlement, an outreach project of the St Andrew Parish Church.   The Celebrant and Preacher was the Rt. Rev. Robert Thompson, Suffragan Bishop of Kingston, and a former Rector of St. Andrew Parish Church.

The St Andrew Settlement, which is the largest outreach project undertaken by any single  Church in the Diocese, was launched in February 1965 when Mr. John Levy  was commissioned as full-time Director and a staff, including Nurse (now Deaconess) Esmin Peters, was appointed. However, the Church’s involvement in the community dates back to 1955 when the Mission House (which ran a Sunday School) and Basic School were established.  Today the operations of the Settlement consist of a Day Care Centre for the elderly, Infant School, Health Centre, Library and Community Centre. More than 5,000 persons benefit from these services.

The Anniversary Service was well attended by members the community, including a large number of children and young people. Also attending were members of St. Andrew Parish Church who have served on the Board of Management, and who assist with the Sunday School,  the Infant School, and the library; and also serve the Mission. Doctors from the Parish Church who give voluntary service to the community were also present.

A highlight of the Anniversary Service was the announcement that the family of Mr. John Levy will be giving a Scholarship in his memory to a young member of the community.

Dr. Lucien Jones, writing in the St. Andrew Parish Church’s “Sunday Camera” noted that through this Project, and with the help of many partners, the Church had sought to make a difference in the lives of residents in this densely populated inner-city community, which usually made the headlines only when someone was murdered, or some social ill was uncovered. He referred to the “soul searching sermon” (Please click here for full text) delivered by Bishop Thompson, who called for a Christianity, which does not have a ‘what is in it for me’, plan.

Unfortunately, the Bishop noted, this is what is being preached in many pulpits, and attracting the crowds. Instead, he urged the congregation to follow Christ, “as one who serves; as one who loses His life on the Cross of Calvary, so that we may gain a new and resurrected life; and one who accepts that life is a gift, given so that we may spend it – in service to others.”

The Rector of St. Andrew Parish Church, The Rev. Canon Sirrano Kitson, in his welcome, acknowledged the contribution of the volunteers who have served the Settlement since its inception. The current Chairman, Miss Greta Bogues, thanked everyone who made the day-to-day operations possible, in spite of the many challenges.