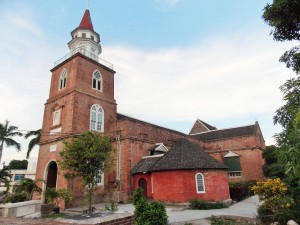 A Choir Festival, historic exhibition, guided tours of the Cathedral of St. Jago de la Vega, Spanish Town and a Festal Evensong are some of the features being planned for the annual Cathedral Sunday pilgrimage scheduled for November 23, 2014. This year’s pilgrimage is one of the activities being organised to highlight 350 years of Anglican worship in Jamaica, and members of the Diocese are being encouraged to participate.

Originally established on the ruins of the Spanish Church of the Red Cross, which was destroyed by invading British troops in the late 1600s, the historic structure became the Cathedral of the Diocese in 1843; and it is a national heritage site. It has been the venue for the enthronement of all the Bishops of Jamaica, dating back to 1825 when the Rt. Rev. Christopher Lipscombe was installed as the first Bishop of Jamaica; and clergy in the Diocese have been ordained there, as well. Over the years, many national services have also been held at the Spanish Town Cathedral, as it is widely known. It has been visited by British Royalty, as well as Bishops and Archbishops from the Anglican Communion.

Cathedral Sunday, which was first observed on November 24, 2002, seeks to bring representatives of Anglican churches, as well as Diocesan educational institutions and organizations across Jamaica to the “Mother Church” of the Diocese to worship together. The aim is to heighten the awareness of members to the spiritual and historical significance of the Cathedral and to mobilize financial support across the Diocese for the preservation of this national monument.