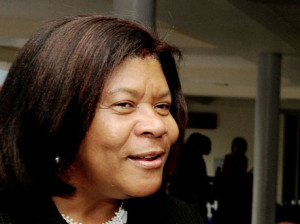 The Hon. Mrs. Justice Zaila McCalla, Chief Justice of Jamaica, has been appointed as the new Chancellor of the Diocese of Jamaica and The Cayman Islands. She succeeds the Hon. Mr. Justice Lensley Wolfe, former Chief Justice, who demitted office earlier this year after serving for 18 years.

Mrs. Justice McCalla’s appointment, which was announced by the Bishop of Jamaica and the Cayman Islands, the Rt. Rev. Dr. Howard Gregory, became effective on July 1.  Bishop Gregory explained that “under the Canons (laws) of the Church, the Chancellor must be a communicant member of the Anglican Church, with legal training. Mrs. Justice McCalla is an ardent and active member of St. Margaret’s Church, Liguanea.”

As Chancellor, she will automatically become a member of the Church Committee at St. Margaret’s, as well as the Diocesan Council which is the Standing Committee of the Synod – the highest body in the Church. She will also serve on the Diocesan Financial Board and as a member of Synod.

The new Chancellor will Chair the Canons Committee which oversees amendments and revisions to the laws that govern the operation of the Church; and she will advise the Bishop and Synod in the interpretation of Diocesan and Provincial (Province of the West Indies) Canons.

Mrs. Justice McCalla will also assume the role of Advisor to the Lord Bishop, in particular, and the Diocese in general, on matters of Ecclesiastical Canon Law. She is one of six children born to Beryl and Leopold Morris in the Parish of Westmoreland.

Educated at the Montego Bay High School, she read for the Bar at the Faculty of Law, University of the West Indies; and attended the Norman Manley Law School. She is the first female to hold the prestigious position of Chief Justice of Jamaica, as well as, Chancellor of the Diocese. She was awarded the Order of Jamaica by the Government in 2007.

She is married to Mr. William McCalla, Attorney-at-Law; and they have three children.