The Rt. Rev. Robert Thompson, who retires in August after 47 years of Ministry, declares that his decision to pursue his lifelong vocation in the Church was made for him by God. The Suffragan Bishop of Kingston, who was ordained a Deacon at age 24, admits that: “There were times when I said, this is not for me, but in the end, God has his way.”
In fact, there was a call on his life from his birth, as he says that his late mother, Elethia, literally presented her firstborn son as an offering to God, in fulfilment of her desire to serve in the Baptist Church which, at the time, did not accept female Ministers. His father, the Hon. James Thompson, former Custos of Westmoreland, and the Rev. Canon Weeville Gordon, Rector of St. James Mission, Grange, which he attended as a child, and who he said was “the model of priesthood as he exuded a joy while exercising his ministry,” ignited the spark within him to live a Christ-centred life and become a priest. As a boarder at Jamaica College, he was further influenced by Fr. John McNab, School Chaplain and Rector of Church of the Ascension, Mona.
Bishop Thompson entered the United Theological College in 1969 and was ordained a Deacon on June 29, 1973, along with Archbishop Howard Gregory and The Rev. Canon Abner Powell. The following year, he was ordained priest on Trinity Sunday. Further studies at McGill University earned him the Bachelor of Theology Degree and the Master’s in Sacred Theology in 1979. He was appointed a Research Fellow at Berkeley Divinity School at Yale University in 1988, and he received the Doctor of Ministry Degree from the Episcopal Divinity School in Cambridge in 2004.

Oversight for construction of the Church of the Resurrection in Duhaney Park was his major achievement as Assistant Curate at The Church of St. Mary the Virgin. The project assigned by the Rector, the Rev. Canon Ernle Gordon, made Robert Thompson the first Curate in the Diocese to undertake a task of this magnitude. Conceived as a community centre and basic school, the structure showcases the work of two outstanding Jamaican artists, Carl Parboosingh and Christopher Gonzales, both of whom offered their service free of cost.
In 1980 he was appointed Rector of St. Jude’s, Stony Hill. Describing his 10 years at that Church as “my hardest bit of work,” Bishop Thompson recalls spearheading its Centenary Celebrations in 1987. This included monthly activities which featured presentations by specially invited guests from overseas. During his tenure, he also guided the rebuilding of St. Phillip’s, Brandon Hill and St. Christopher’s, which were destroyed by fire and hurricane, respectively.
He subsequently served as Rector of St. Andrew Parish Church for 15 years from 1990-2005, during which he was appointed a Canon of the Cathedral. The transformative work undertaken by the Parish Church’s flagship St. Andrew Settlement project in the Majesty Gardens community entered a new phase when Bishop Thompson mobilized support from Habitat for Humanity and the Ministry of Housing to construct houses on land leased by the Church. He also successfully promoted the establishment of a Community Council to assume responsibility for the protection and maintenance of social facilities in the area. The St. Andrew Care Centre for Street Boys which provided meals, sanitary facilities, basic education and life skills was another initiative led by this advocate for human development, who has boldly engaged the support of private and public sector heads for sundry projects over the years.
He speaks of the joy in serving as a parish priest with overall responsibility for a Cure, teaching Confirmation class, conducting Baptismal interviews and visiting the sick and shut-ins.
“When you can enter through the backdoors of your members’ home, you are in. You belong; they belong to you; and you have to love and care for them,” he maintains.
This is an aspect of pastoral ministry that Bishop Robert misses since his consecration as Suffragan Bishop of Kingston on May 31, 2005. However, he says his Episcopacy has enabled him to serve both his fellow clergy and thousands of members across the six parishes in the Region.
One highlight of his tenure was his successful negotiation of a grant from Trinity Church, Wall Street in the United States of America to enhance the Social Media capabilities of the Diocese.
“This has enabled us to deepen virtual communication especially during this COVID-19 pandemic; and it has fundamentally changed how we communicate in our Diocese, with colleagues in the Province of the West Indies, and further afield,” he informs.
The funds also facilitated the development of the Diocesan and Provincial websites.

Looking back at his 47 years in ministry, he notes that the late Bishop Alfred Reid was a major source of spiritual guidance. At the same time, he says young clergy have also mentored him.
“Clergy must learn to rely on others in order to achieve their objectives,” he advises. “This is not a one-man show. You must seek buy-in from members of your congregation, and also find a way to incorporate those persons who you perceive to ‘terrorize’ their Rector.”
Family adds value to our ministry and meaning to life, and clergy should always remember this, Bishop Robert states. He is especially grateful for the support of his parents, who are both deceased; his wife, Charmaine, who he says has been a wonderful resource to him; his sons, Matthew and Joseph; and his granddaughter, Maliyah, who he describes as his “bundle of joy.”
An avid reader, Bishop Thompson also enjoys listening to music, caring his ornamental fish, and when it comes to relaxing, he says: “There is nothing like having a Red Stripe with a friend, or a glass of red wine.” A serving of curried goat and roti, for which he developed an affinity during his childhood in the farming community of Fort William in Westmoreland, where many Indians lived, is a great treat for him.

As he looks forward to retirement, Bishop Thompson advises clergy and persons entering ordained ministry that: “If you don’t love the Lord, and if you don’t love yourself, don’t bother to apply.” He adds that there has to be a deep movement in the lives and souls of priests which reflects this love.
He says that he plans to be around; and therefore, persons can approach him for counselling and advice. “Let love reign in our hearts for each other and this Church of ours,” he concludes.

Written by Beverley Newell based on an Interview done by
The Rev. Olando Gayle 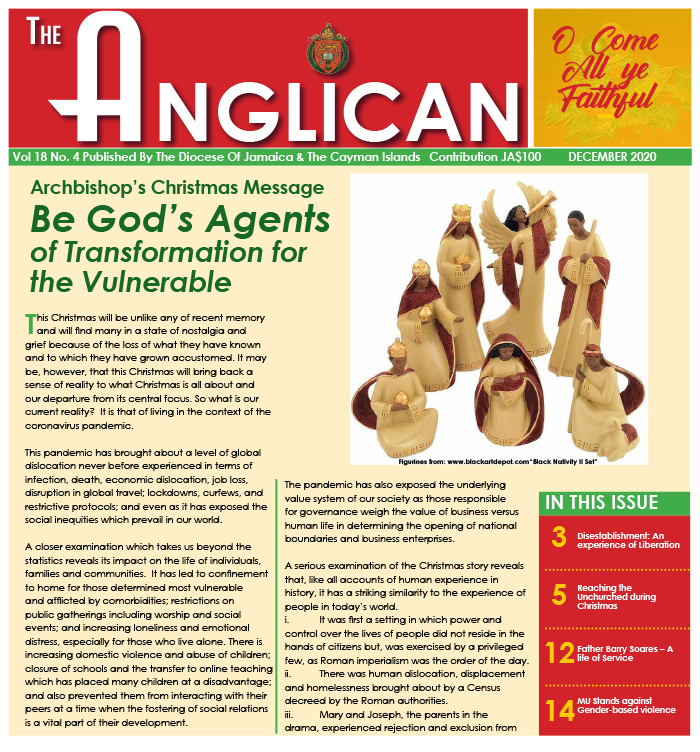