Music Unites Jamaica Foundation (MUJF), in collaboration with the German Embassy of Kingston is presenting a series of three free concerts with the highlight once again on the work of Jamaica’s first documented composer, Samuel Felsted (1743 – 1802).  These concerts will feature the German Organist Gabriele Schenkel with Kimiela Isaacs as soprano; Peter Ashbourne on violin; David Reid – tenor; Rosina Christina Moder on Recorder; Alistair Petri – cello; Winston Ewart on piano performing Jamaican and German compositions with the special emphasis on Samuel Felsted’s Organ Voluntarys.

However, there will be an Extraordinary Lunch Hour Concert, which since 75 years usually takes place at the Institute of Jamaica Lecture Hall, but this time, on Thursday November 16, at 12:15, it will be held at the Kingston Parish Church. This concert is designed especially to introduce school children to the grand and elegant sound of the church organ.

It is also our aim to bring to the students’ awareness the position of Samuel Felsted and the Kingston Parish Church within the music history of the world:

Jamaica’s first documented composer, Samuel Felsted has served at the Kingston Parish Church as organist for the last 19 years before his death in 1802.

While playing organ at the church Felsted wrote a book of ‘Six Voluntarys for Organ or Harpsichord’ which was published in 1795 in London. Some of these pieces will be performed at the concerts.

That Felsted also wrote an oratorio called ‘Jonah’ while at the St Andrew Parish Church, published at 1775  in London, and the fact that it is the first complete oratorio written in the Americas, is by now well known in Jamaica.

We would be delighted by your presence at one of the concerts. 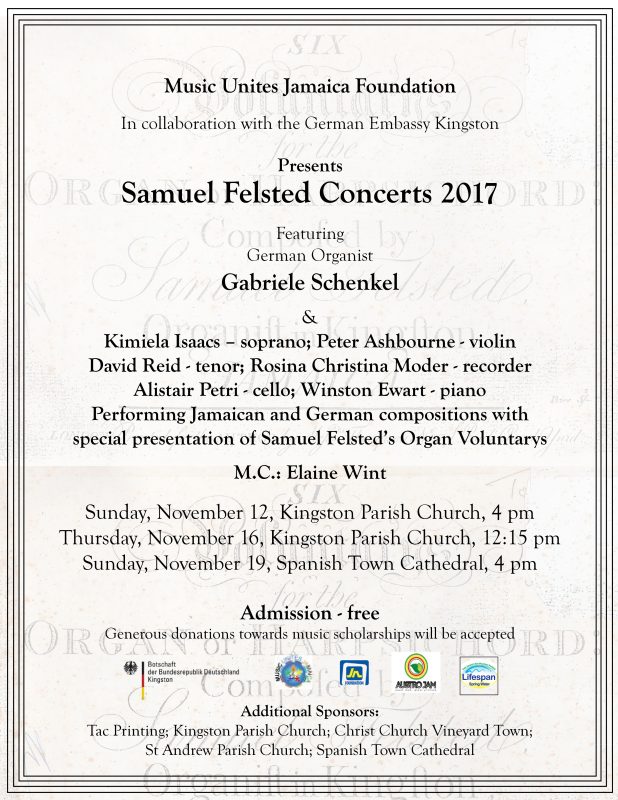