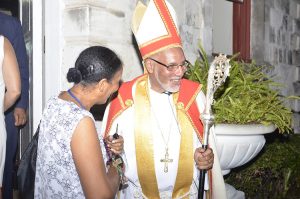 The Rt. Rev. Howard Gregory, Bishop of Jamaica & The Cayman Islands has challenged members of the Diocese to confront, in creative ways, the challenges that are preventing the effective delivery of the Church’s mission and ministry.

In a wide-ranging Charge delivered at the Opening Service of the 147th Synod of the Church held on April 18 at the St. James Parish Church in Montego Bay, Bishop Gregory pointed to the urgent need for clergy and laity to become agents of transformational change, both within the Diocese and the wider community. The call comes against the background of decline and stagnation in some areas of the Church’s life; as well as the increasing levels of abuse and domestic violence against women and children; the devalusing of human life and the deepening level of decadence in the society.

Speaking to the Theme “The People of God: Called to transformational Mission,” Bishop Gregory stated that the sense of urgency in God’s call to action by the covenant community, both in the Old and New Testaments, was nothing new. However, he noted that in these situations, “God calls, commissions and empowers his leaders and people for action of a transformational nature.”

He drew examples from the Book of 1 Kings starting at Chapter 16; the Acts of the Apostles; and Luke 9 to support his point. The narrative in 1 Kings recounts the wilderness experience in which God prepared the prophet Elijah to restore religious faith in Israel. Despite the threat of persecution from the pagan King, Ahab and his wife Jezebel, God empowered Elijah to lead the change process by anointing new kings, and also selecting his own successor, Elisha.

Bishop Gregory said that in Acts 1, the disciples were equally devastated when the resurrected Jesus ascended into Heaven, leaving them with the daunting task of carrying on his mission. He noted that once they stepped out of their comfort zone, they positively impacted a world that was hungry for the message with which they were entrusted; and contributed to the spread of the church through the ages.

Likewise, Bishop Gregory charged that: “Standing by sky-gazing in the face of the perceived daunting nature of the Mission, and in the hope of recapturing a good thing from the past, will not fulfill the mission to which God is calling the church in this generation.”

He lamented the decline in volunteerism in the church and the nation, and likened this situation to the passage in Luke 9: 57-62 in which several persons offered excuses when invited by Christ to participate in his mission. However, he stated that excuses or suggestions that the moment was not right had no place in the Transformational Mission of God which required change that is radical and driven by the urgency of the situation and moment.

“The challenge for us today as a Diocese is whether we trust God to be faithful to his word and are prepared to venture forth with him in the Mission to which he is calling us at this time,” Bishop Gregory asserted.

Music for the Service was provided by a combined choir under the direction of Mr. Audley Davidson; with accompanying musicians from the Jamaica Defence Force.

Click here for the full text of the Bishop’s Charge.
The Service is also available on Synod Page.