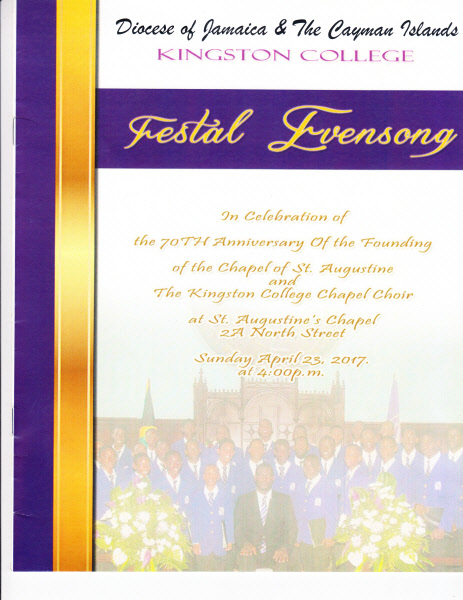 A Festal Evensong was held on April 23, 2017 at St Augustine Chapel, Kingston College, to celebrate the 70th anniversary not only of the Chapel, but of the Chapel Choir. I t was in February 1947 that the Chapel was dedicated by Archbishop Hardie to the Glory of God and to the ideals of St Augustine of Hippo.  The Choir was established the same year. For Bishop Gibson, the school founder and first headmaster, the establishment of the Chapel was a dream come true as the chapel was at the centre of his ideals for the school.

Over the past 70 years the K C Chapel Choir has become perhaps the best known school choir in Jamaica with an impressive repertoire of music. In the past eight (8) years the Choir has averaged approximately 45 performances per year culminating in the annual Christmas Concert Season, the highlight of the annual calendar.  They have made several overseas tours and have produced several recordings of their concerts.

The service of thanksgiving to celebrate the 70th Anniversary was presided over by Bishop Robert Thompson, the Suffragan Bishop of Kingston who gave the homily.  Among the other members of the clergy taking part in the service were Canon Abner Powell, the Chaplain and Rev Michael Brown.

Congratulations to Mr. Audley Davidson, the current Choir Master and the Choristers for their performance celebrating this important milestone and for maintaining the high standard set by their predecessors over the years.