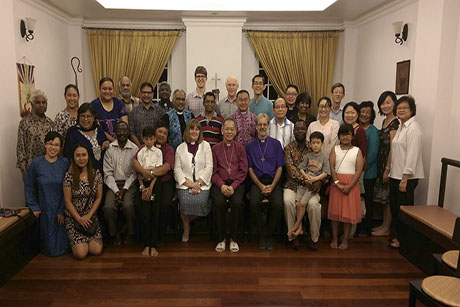 Anglicans around the world are joining in a movement of discipleship, equipping each other to spread the power of the Gospel. The co-ordinating group for the Season of Intentional Discipleship is meeting this week in Kuala Lumpur, Malaysia amid growing excitement. As they gather, a film highlighting the Season of Intentional Discipleship has been released. (Sous-titres en Français ; subtítulos en Español; legendas em Português.)

The group hopes that by sharing stories of existing discipleship programs all Anglicans across the Communion will join in. Many initiatives have begun since the Season of Intentional Discipleships was discussed at the 16th meeting of the Anglican Consultative Council (ACC16) which took place in Lusaka in April 2016.

This week the group will be sharing development from regions including Jamaica and the Cayman Islands, the Indian Ocean, Central Africa, Kenya, Southern Africa, Canada, the US, England and South East Asia.

John Kafwanka, Director for Mission for the Anglican Communion, shared his thoughts on the initiative. “It is clear that this is a movement of the Holy Spirit and the Season of Intentional Discipleship is surely underway. New and exciting initiatives, activities and tools are being developed to help every Anglican to grow in what it means to live and share a Jesus Shaped Life.”

This meeting brings news of a renewed commitment and focus to discipleship and the power it has on Christian communities around the world. The Archbishop of Canterbury Justin Welby explained the importance of this Season of Intentional Discipleship. “It is the most exciting thing we do as Christians, bringing other people to Christ,” he said.

The Archbishop went on to encourage the entire Communion to be involved, saying: “this is something that is not just for clergy and bishops. It’s for everyone. And it’s not just for those who find it easy to talk about their faith. We are all to be witness to the life and resurrection of Jesus Christ. That’s something we really need to equip people to do. Every single Christian.”

The Recently installed Archbishop and Primate of South Sudan, Justin Badi Arama, committed to prioritising the making and teaching disciples across South Sudan. In a video interview for ACNS, he said: “This is how we will be able to reconcile our people. We will disarm their hearts and minds of all thoughts of violence and hatred. So we will make it a priority to preach and teach the Gospel to all our people, to our politicians, and to all Christians throughout South Sudan.”