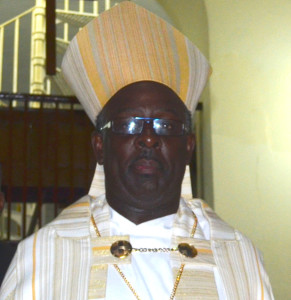 The Rt. Rev. Leon Paul Golding was elected the fourth Bishop of Montego Bay on September 25, 2012 and was consecrated to that office on November 16, 2012 at the St. James Parish Church in Montego Bay.

Born in England, he came to Jamaica as the son of returning residents.  In SpanishTown, he came under the influence of the late Canon Basil Jones and after offering himself as a candidate for the ordained ministry, he became a deacon in 1984 and a priest in 1985.

He spent his years as a Deacon at the St Andrew Parish Church from 1984 to 1988, serving under the supervision of the late Bishop Herman Spence, then the Rector. He subsequently served as a Rector in four parishes: St. Mary in the Port Maria Cure, (1988 – 1990); St. Andrew in the Stony Hill Cure  (1990 – 2000); Kingston at the Parish Church (2002 – 2008) and finally, St. James at the Church of the Holy Trinity, Westgate, Montego Bay from 2008 until his election. In his last two appointments he also served as Archdeacon of Kingston and Montego Bay, respectively.

He brings to his position as Suffragan Bishop for the Montego Bay Region a wide range of pastoral experience.

Apart from holding the B.A. in Theology and the Diploma in Ministerial Studies from the UnitedTheologicalCollege of the West Indies, Bishop Golding holds the Master of Philosophy degree which he obtained in 1966 from the University of Birmingham in England.

He is married and married and has three children – Lisa, LeeAnne and Luke-Paul who are all involved in the life of the Church.