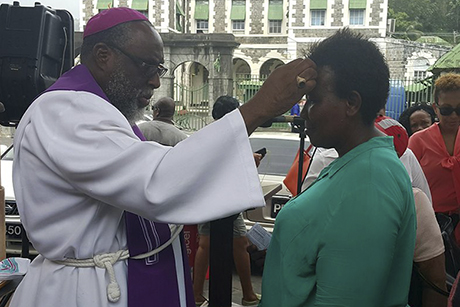 The market square market in Kingstown, the capital of St Vincent and the Grenadines, became the venue for an Ash Wednesday service this week.

It was celebrated by the Anglican Bishop of the Windward Islands, the Rt Reverend C Leopold Friday, assisted by Father Hanif H R Johnson and several ordained deacons and lay ministers. Three years ago after discussions with the former dean of St George’s Cathedral, the decision was taken to have a service in the Square at 12.15pm.  Bishop Leopold:  “First of all we thought it would be a good thing to take the service of the imposition of ashes to the Market Square to meet people where they are and it provided an opportunity for us to share this with the wider community.  Secondly, due to the fact that carnival is no longer held in St. Vincent and the Grenadines at the traditional time which was leading up to Ash Wednesday, there is a sense that people are no longer aware of when the Lenten season is, as such increasingly they pay less attention to it, he said.

Bishop Leopold said he sees it as part of the response to God’s call to mission – to proclaim the gospel and to teach:  “This is the third year that we have had the service at the Market Square and the response has been quite good.  People would come and inquire of what is happening?  What Ash Wednesday is all about?  Over the years several persons after we informed them of what it is, decided to receive the imposition of the ashes even though they are not members of the Church or had never heard of it before.”   Similar services were held in other Carribean islands including Antigua.

Ash Wednesday derives its name from the practice of blessing ashes made from palm branches blessed on the previous year’s Palm Sunday, and placing the ash, in the shape of a cross on the foreheads of participants to the accompaniment of the words “Repent, and believe in the Gospel” or “Remember that you are dust, and to dust you shall return”.

Posted on: March 3, 2017
From the Anglican Communion News Service (ACNS)