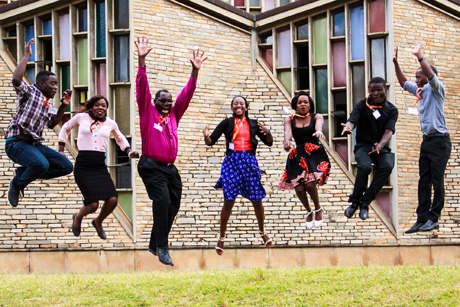 The Bishop of Lusaka, David Njovu, with young people outside the Cathedral of the Holy Cross

[ACNS, by Bellah Zulu] A panel of both young and elderly representatives from the Church of the Province of Central Africa (CPCA), the Anglican Church of Southern Africa (ACSA) and the Anglican Church in Aotearoa, New Zealand and Polynesia shared with ACC-16 members the various strategies of keeping young people in the church.

“Some young people are leaving because we have made the church a place for perfect people,” said the youth coordinator for CPCA, Faher Bob Sihubwa. “There is need to create space and receive the youth just as they are so that they can transform out of their own conviction.”

Another panellist, the president of the Zimbabwe Anglican Youth Association, Cathrine Ngangira, narrated how some time back her diocese never had an office for young people and how discouraging that was. “We had Mothers’ Union offices and many others but not for the youths,” she said. “But we convinced our diocese to have a dedicated youth office and are working towards having a full time and not just voluntary youth coordinator.”

Ncumisa Ukeweva Magadla is a young Anglican from ACSA. She talked of the need to trust young people and how her diocese is trying to keep the young people involved in the church especially in the area of the environment. “We do not necessarily need to change our identity as a church to suit the people,” she said. “But we have instead tried to make the issue of coming to church and the environment trendy using Social Media and various interesting hashtags.”

Earlier, young people from the Diocese of Lusaka performed a silent play depicting the challenges that young people face in the church and how they can be addressed. Through visual aids and demonstrations, the youth group juxtaposed the sometimes slow and conservative nature of church music and the beat and rhythm of secular music which many young people love.

“Our diocese has given young people a platform to be heard such as through youth services and some sporting activities,” said the youth chairperson for St Peter’s Parish in Lusaka who is also the vice youth chairperson for Lusaka Archdeaconry, Juliet Phiri. “We know many young people like movies and music with a good beat so we are trying to use their style and culture to proclaim the gospel.”

Father Sihubwa added: “Many young people wonder why they must go through the same rhythm of the liturgy when it is possible to bring variety using creativity and innovation,” he said. The energetic youth leader also emphasised that what the young people needed was to be trusted for as long as the elderly continue to provide mentorship.

The Revd Jacynthia Murphy from Anglican Church in Aotearoa, New Zealand and Polynesia emphasised the need to mentor the young in the church. “We work so tirelessly to make sure that the young people are nurtured both culturally and spiritually,” she explained. “Part of our culture involves the handing down of the treasure and wisdom to young people, but of course the challenge comes when trying to create synergy between the young and elderly.”

However, the discussion also underpinned the vital role that elders play in the church. Catherine Ngangira, the Zimbabwe youth leader reminded ACC members: “We need the elderly to help us understand where we are coming from and so that we are able to decide where we want to go as young people in the church,” and added “elderly people should not get discouraged when youth don’t seem to participate because people learn differently and that there will come a time when they will put to practice what they have learned.”

But another panellist, the Archbishop of Cape Town, the Most Revd Dr Thabo Makgoba, summed up the discussion well when he said: “When we chase the young people from church because of their attire and dress code, we’re missing a great opportunity to proclaim the gospel of Christ to those that are ready.”

In a separate interview, the Bishop of Lusaka Diocese, which is hosting ACC-16, David Njovu reiterated the need to continually mentor the youth in the church. “Involving the youth in events such as ACC-16 helps us understand their various needs and challenges,” he said. “I grew up at a time of high church but through my interaction with young people I realised there was need to take action to keep the young in church, and encouraged them to interact with youth from other countries.”

In his reflection to begin the day, spiritual leader of the worldwide Anglican Communion and Archbishop of Canterbury, Justin Welby, gave direction to ACC-16 members and the discussions that followed when he proclaimed: “Discipleship is not a survival strategy for the church, it’s something that needs to happen.”