“When he was at table with them, he took bread, blessed and broke it, and gave it to them.  Then their eyes were opened, and they recognized him; and he vanished from their sight”.

Luke’s story of what happened on the road to Emmaus is one of seven post-resurrection stories in the gospels, and like the rest of them it is a little ghostly: the stranger whom the disciples do not recognize at first, who turns out to be the Messiah, vanishes from their sight as soon as they discover who he is. The Good Friday event, on the other hand, is solid; everything about it can be verified.  Jesus is nailed to the cross where he dies in front of eyewitnesses.  No case of mistaken identity.  However, His resurrection is largely rumour.  Someone said that someone said his tomb was empty, and as you know, that could mean anything.  In any event it was women who first spread the story, and who would take them seriously.

And now we come to today’s story.  Luke is the only gospel writer who tells the story of what happened on that road, but everyone has walked it at one time or another. It is the road you walk when your team has lost, your candidate has been defeated, your loved one has died – the long road back to the empty house, the piles of unopened mail, to life as usual, if that is ever possible.

It is the road of deep disappointment. And you can feel the absence of joy in the language of the two men.  They are returning home knowing that home won’t be the same.  It was only a few years ago that they met someone who radically changed their lives – they had left everything and followed him.  He had made them into a people for whom the world was no longer a burden, but a place of hope and endless possibilities.  Now, He is dead.  Not just Him, but their very future spells darkness.

As they talk to each other a stranger comes up behind them and asks them what were they talking about; “Are you the only visitor to Jerusalem who does not know the things that have happened there in these days? The truth is, they are both glad for the company, and so they walk with him as they tell him everything they know and how things had looked so promising at first, but now everything has changed.

“We had hoped he was the one to redeem Israel,” they say to him, admitting their defeat. “We had hoped”. To speak of hope in the past tense is one of the saddest sounds a human being could ever make.  We had hoped he was the one who would make things right; we believed things might have really changed, but we were wrong.  How often do we hear ourselves speaking like that about events in our lives; our church; our community? 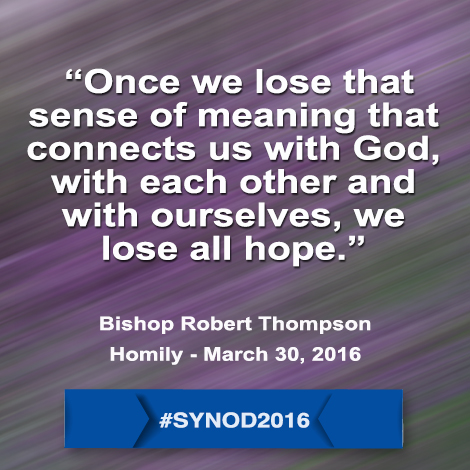 The disappointments and losses that settle themselves deeply in our hearts can easily lead to resentment.  Beyond all of these losses, there is the loss of faith – the loss of a conviction that our life has meaning.  Once we lose that sense of meaning that connects us with God, with each other and with ourselves, we lose all hope.  This is the tragedy about life for many persons today.

The question that the Emmaus story leaves with us is what do we do with our losses?  Are we hiding them?  Are we living as if they aren’t real?  Are we trying to convince others and ourselves that our losses are little compared with our gains?  Or are we simply blaming others?  We do all these things most of the time, but the journey on the road opens new and amazing possibilities.

As they listened to the stranger opening up the scripture; placing them in the context of a story much larger than their own; suddenly what had seemed so confusing began to offer new horizons; what had seemed so oppressive began to feel liberating; what had seemed so extremely sad began to take on a quality of joy! As he talked to them, they gradually came to the realization that their little lives weren’t as little as they had thought, but part of a greater mystery.  That Jesus Christ is not the undefeated champion; he is the suffering servant, the broken one, who comes into glory with his wounds still visible.

When the two disciples arrived at their village they invited the stranger to stay with them and he does.  It turns out he is not much of a stranger at all. It is their house, their table and their bread but when they sit down at table it is the guest who takes bread, gives thanks, breaks it and shares with the others.  Suddenly, they recognize him and then he vanishes from their sight.

Maybe that is the only good news you will hear if you happen to feel that way this morning; if you happen to feel that your losses are greater than your gains.  Some people don’t see things this way, because they believe blessings come only with their gains. Jesus seems to prefer working with people who are wounded, who know something of their failed love and broken dreams.  He takes a whole loaf, breaks it and shares it.

He will do the same thing with his own flesh and blood, because that is the way of life God has shown him to show the rest of us. To take what we have been given in life – whether we like it or not -yes even our painful scars – to say thanks for it because that is the only way it can be shared.

Luke’s story of what happened on the road to Emmaus is a summary for our encounter with God.  First, there is the closeness of the two disciples on the road, and then their kindness to a stranger.  Then, there is the way their hearts burned within them when he opened the scriptures to them, and how they knew him in the breaking of the bread. These are the gifts you and I are given to share week after week.  These are the Gifts that have shaped us as Anglican Christians over centuries. So, while we count our losses let us count our gifts – fellowship, hospitality, word and sacrament – all the ways Christ promised to be present with us, which as you know, are the everyday activities of every congregation.

When we are summoned to share in Holy Communion with the words: “The gifts of God for the people of God”… that invitation is not a way of saying, ‘If you’re holy enough, then these holy things are for you.’  It’s a way of saying, ‘These are the gifts that make you holy because they unite you with the fellowship of praise, with the harmony of creation, gathered into one in Jesus Christ, the eternal trinity.

There is one sentence in the Emmaus story that was mentioned before, but which needs highlighting before we conclude our reflection. It says; “Then their eyes were opened, and they recognized him; and he vanished from their sight”.  In the same moment that the two friends recognized Jesus in the breaking of the bread, he is no longer there with them.  All during his time with the disciples, there had been no full communion.  Yes, they had stayed with him and sat at his feet. Yes, they had been his disciples even his friends.  But they had not yet entered into full communion with him.  His body and blood and their body and blood had not yet become one.  When they ate the bread that he gave them, their lives were transformed into his life.  It is no longer they, who live, but Jesus, the Christ, who lives in them.  And right at that moment of communion, he vanishes from their sight.  He vanishes because that is the only way they would discover that the things they had come to love and to expect from Jesus would now have to be sought, discovered and nurtured among them.  They had been touched with his hands of flesh, now it was their hands uplifted in praise and extended in service, which would have to become channels of his grace and healing and power.

This is the wonderful, mysterious experience of the Eucharistic celebration and what makes it possible for us to live the Eucharistic life within the community.  Having encountered the real presence of the Risen Christ we are empowered to witness to a deeper freedom, which is to give our lives away, as He did.

A freedom which makes it possible to leave church at the end of the Eucharist and go to other people, to share their lives and name the God who is already there.   Communion with Jesus means becoming like him, leading us to a new realm of being.  Suddenly the two disciples, who ate the bread and recognized him, are alone again.  But this time, it’s different.  They are alone, together with each other and with the Risen Christ who dwells within their inner-most being and invites them to live a new life in the community.

SO, what had begun as a gloomy day of confusion and doubt ended as a day of affirmation, hope and witness to the gift of God’s redeeming love.  As a Diocesan family we have painfully struggled for the past decade and a half over what we have lost.  Some have characterized it as a loss in status, others see it in terms of membership, and still others in the erosion of capital.  When we simply let the facts speak… when everything we feel and do, is overshadowed by our losses, there will always be enough to convince us that, life in the end, leads to nothing but futility.   That I suppose was how the two disciples felt on the first Easter evening.  But the voice that calls us “foolish” the voice that spoke to them is the voice that ask us to have a completely new look at our lives, a look not from below where we count our losses, but from above, where the Risen Christ offers new life.

My hope and prayer is that all our conversations over the next two and a half days will begin from this place, as we work together for an enlivened and transformed church. A place where our hearts will again begin to burn within us because we too have met the risen Christ who opened our eyes a-fresh to the scripture so we can tell our story of the difference the presence and power of God have made in our lives.  If we can do that, then we would have captured something of the Emmaus story.  And that would be enough in creating that preferred future we all dream of for our Diocese.