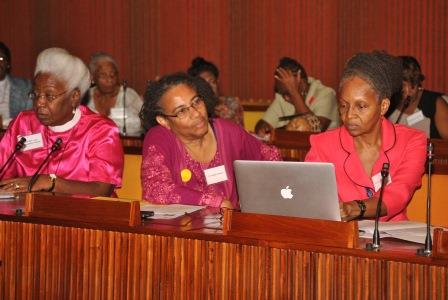 Participants at an historic conference in 2014 to celebrate the 20th anniversary of the ordination of women in the Diocese.

The contribution of women to the ministry of the Anglican Church in Jamaica will be the focus of a day-long Exposition which will be mounted at St. Luke’s Church Hall, Cross Roads on Saturday, October 31 from 10.30 a.m. to 5.00 p.m.

The Exposition under the theme “Celebrating Women in Ministry: Called to Service,” will be officially opened by the Bishop of Jamaica and the Cayman Islands, The Rt. Rev. Howard Gregory. It will feature an historical display with photographs, as well as paintings, craftwork, stained glass creations, jewellery, vestments and church linen. Several of these items, which were made by ordained and other women in the church, will be available for sale.

The day’s activities will be preceded at 9.30 a.m. by a March of Witness which will include women who serve as deacons and priests, members of the Church Army, Associate Evangelists and representatives of the Mothers’ Union and the Women’s Auxiliary. The march will be accompanied by the All Saints Marching Band. (Please click here for other details).

Women have been actively involved in the ministry of the Church, dating back to 1890 when the Order of Deaconess was established. Over the years, they have served as chaplains in schools and hospitals; in the wider community as social workers; as well as in the evangelistic and outreach programmes in the Diocese; and since 1994, in the ordained ministry.