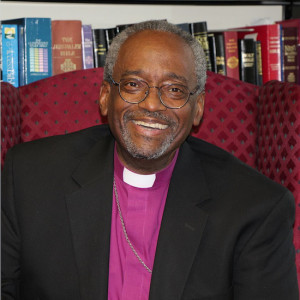 The Episcopal (Anglican) Church in the USA has elected its first African-American Presiding Bishop. He is the Rt. Rev. Michael Bruce Curry of North Carolina, who received 121 of the 174 votes cast on the first ballot at the recent 78th General Assembly of the Church, held in Salt Lake City, Utah.

The 62-year old Bishop Curry, who will be installed as the 27th Presiding Bishop of the Episcopal Church on November 1, will succeed Bishop Katharine Jefferts Schori, who was the first woman in the worldwide Anglican Communion to lead a national church.

The Presiding Bishop-Elect has served in the ordained ministry for some 37 years. He was ordained a Deacon in June 1978 and entered the priesthood in December that year. He subsequently held appointments as Rector of churches in North Carolina, Ohio and Maryland. In his three parish ministries he engaged in crisis response pastoral care, the founding of ecumenical summer day camps for children; preaching missions; the creation of networks of family day care providers; and he mobilized investment in inner-city neighbourhoods.

He was consecrated on June 17, 2000 as the 11th Bishop of the Diocese of North Carolina which has some 112 congregations with an estimated 48,000 members. Bishop Curry has served on several Episcopal Church Committees and organizations. These include the Board of Episcopal Relief and Development, which he chairs; the Board of Trustees of St. Augustine’s University; and the Board of Directors of the Alliance for Christian Media.  The Bishop who operates a national preaching and teaching ministry, and is a prolific author, is known for his emphasis on evangelism, public service and social justice.

Bishop Curry was born in Chicago and grew up in Buffalo, New York. He holds a Bachelor of Arts Degree from Hobart and William Smith College; and the Master of Divinity Degree from Berkeley Divinity School at Yale. He did Continuing Studies at the College of Preachers, Princeton Theological Seminary in New Jersey; Wake Forest University in North Carolina; the Ecumenical Institute of St. Mary’s Seminary in Maryland; and the Institute of Christian Jewish Studies.

He and his wife Sharon are parents of two grown daughters.