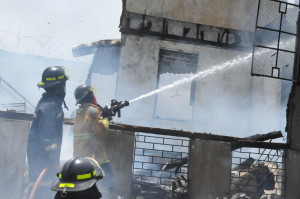 Firemen fight to control the blaze which destroyed the dormitories at The Wortley Home. (Jamaica Observer Photo)

In the wake of the fire which destroyed the Wortley Home for Girls in Constant Spring, on  Monday, June 29, the Diocese of Jamaica and The Cayman Islands, which owns and operates the Home, has opened a Rebuilding Fund.

Donors are being invited to make contributions to Account number 48459 at the Scotiabank Group Financial Centre, 132-132a Constant Spring Road, Kingston.

Wortley Home Board Chairman, Raphael “Keith” Sangster, explained that, “Investigations into the cause of the fire are still underway and planning for the new development is at a preliminary stage.”

Mr Sangster also revealed that, “There has been a tremendous response from members of the Church and the wider public to the plight of the 19 girls and two House Mothers who lost their belongings in the fire which destroyed all the dormitories. We have received donations of clothing, personal care items and food which have enabled us to meet all their immediate needs.”

The girls are being temporarily housed at the Immaculate Conception High School for the remainder of this week; and, Mr Sangster says the Board of the Wortley Home is now collaborating with the Child Development Agency (CDA) to put a more permanent solution in place.

“We are heartened by the support which we have received from senior officers of the Diocese, the CDA, the Office of The Children’s Advocate and our Board members who were early on the scene of the fire, and are now providing strategic assistance in the aftermath,” the Chairman stated.

Founded in 1918 by the Rev. Canon Wortley, who was then Rector of the St. Andrew Parish Church, and his wife Bertha, the Wortley Home for Girls is one of three Children’s Homes operated by the Anglican Church in Jamaica under the jurisdiction of the CDA.

The other two facilities are the Clifton Boys’ Home in Darliston, Westmoreland; and

St. Monica’s Home in Chapelton, Clarendon. The children attend churches and schools that serve the community in which each Home is located.