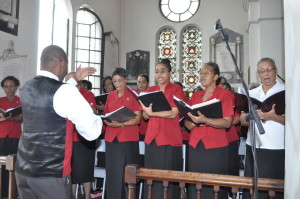 The widely-acclaimed Diocesan Festival Choir, which is the longest-serving choral group in Jamaica and which has been in the vanguard of classical and church music presentations, marks its 90th Anniversary this year. Several items from the Choir’s diverse repertoire will be featured in a short Recital during the Anniversary Service to launch the milestone celebrations on Sunday, May 17 at the Kingston Parish Church, starting at 3.30 p.m.

These include Sanctus, a piece commissioned for the celebrations and written by Carl Hines, a  member of the Choir whose talent as a composer has been gaining recognition locally and in Trinidad and Tobago where he presently works. The Anthem Hymn, The King of Love My Shepherd Is by Harry Rowe Shelley; The Lord’s Prayer by Eric Levy and the traditional Rastafarian chant, Holy Mount Zion, arranged by Olive Lewin, will complete the afternoon’s presentation.

Celebrant at the Service will be the Rt. Rev. Dr. Robert Thompson, Suffragan Bishop of Kingston, who is also Chairman of the Choir’s Management Committee. The Sermon will be delivered by the Rt. Rev. Alfred Reid, retired Bishop of Jamaica and the Cayman Islands. Lessons will be read by Mr. Vivian Crawford a former member of the Tenor Line who now serves on the Management Committee and whose relationship with the Choir dates back some 50 years; and Mr. Dominic Cobran, one of the youngest members. A special offering will be received at the Service for the George Goode Memorial Scholarship Fund in honour of the Choir’s founding Director.

Bishop Thompson notes that: “Ninety years in the life of any organization is a major achievement. The Diocesan Festival Choir has established a strong tradition of excellence in choral music, and over the years, it has attracted many noted singers, conductors and accompanists to its ranks. The fact that these persons have faithfully served this Choir as volunteers is even more commendable.”

Bishop Thompson says that during the anniversary year, the Choir will undertake a series of recitals in churches across the island. The celebrations will culminate with two Gala Concerts on November 29 and December 6.

The Diocesan Festival Choir was formed in 1924 at the initiative of the then Bishop of Jamaica, George Frederick Cecil DeCarteret, to commemorate the 100th Anniversary of the Diocese of Jamaica. One year later, it became a permanent organization under the baton of Mr. George Goode who, at the time, was Choir Master and Organist at St. Michael’s and All Angels Church, Victoria Avenue, Kingston. Others who have served in this capacity include well-known practitioners in the music fraternity, such as, Mrs. Hazel Lawson-Streete, Mr. Maurice Gordon and Mr. Paul Ramsey.

Over the years, the Choir has performed at worship services, concerts, civic and national events. It has also undertaken concert tours in the Cayman Islands and Barbados. Comprising just over 40 members, the ensemble includes several of Jamaica’s most outstanding singers who also perform with other groups such as the National Chorale, the NDTC Singers, the Jamaican Folk Singers and the Portmore Chorale. Although the Diocesan Festival Choir operates under the auspices of the Anglican Church, its membership includes a cross-section of the Christian community

Described as “a Jamaican institution dedicated to God’s glory,” the Diocesan Festival Choir continues to fulfill its twin objectives of promoting choral music as an art form; as well as furthering the observance and practice of Godly principles in the lives of its members and those to whom it ministers. It is now directed by Mr. Michael Sutherland and accompanied on organ and piano by Mrs. Ann Trouth. The Choir’s membership has been augmented for the 90th Anniversary celebrations; and noted Choir Director, Mr. Geoffrey Shields, has also been brought on board as Guest Conductor.