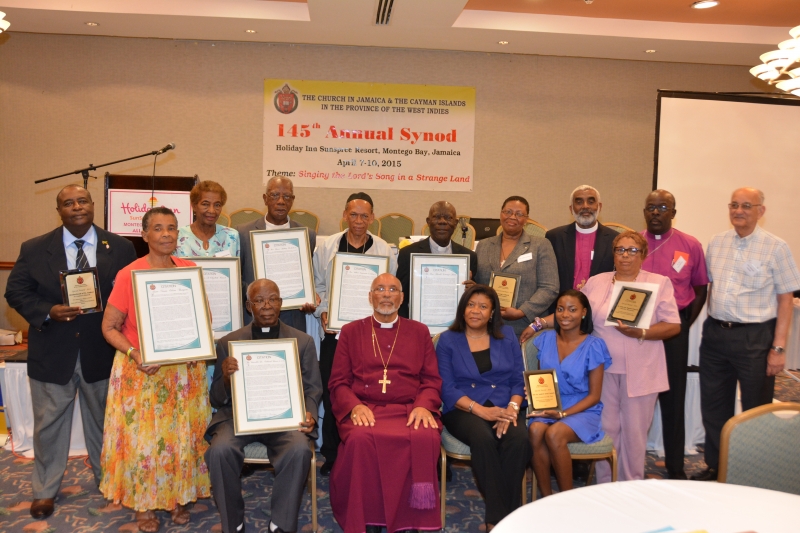 Retirees and awardees with senior officials of the Diocese

In a gesture which was deeply appreciated by the honourees, the recent Synod took a break from its business sessions on April 9, to say thanks to six retirees and to recognize outstanding performances by four church organisations in 2014.

Honoured for their contributions to the Church were:

The Venerable Edmund Davis, O.D., who served the Diocese and the nation for 45 years. For 28 of these years, he was Rector of St. George’s Church in downtown Kingston, where he guided the establishment of a strong outreach progranme in response to the pressing socio-economic needs of residents in the area. The former Archdeacon for the Kingston Region, also served in many Cures, and was General Secretary of the Jamaica Council of Churches from 1978 – 1986. Archdeacon Davis is the author of seven books.

The Reverend A. Elizabeth Roach, for her 28 years of service to the Diocese, chiefly as Director of the Department of Mission & Ministry and as Rector of the St Paul’s Cure in Chapleton, Clarendon from 2003 – 2014.  Her early experiences as a social worker/counsellor and community development officer served her in good stead as Rector, as she endeared herself to the communities served by the church and responded energetically to the spiritual, social and other needs of members and citizens.

The Rev. William Lindsay, who gave lifelong service to the Anglican Church and was a member of the diaconate and priesthood for 22 years. At ease in inner city communities such as the ones served by All Saints Church, West Kingston, where he began his ministry, as well as in the farming communities of the Croft’s Hill Cure in Clarendon where he served as Priest-in-Charge from 2003 – 2014, Rev. Lindsay had a dynamic and fulfilling ministry which impacted on the lives of many persons.

The Rev. Horace Richards for his service in the ordained ministry since 1994, as well as for his prior contribution to the Anglican Church as a member of the laity. His more than 40 years of service as a school teacher and Principal were proven assets when he entered full-time ministry. Most of this time, 11 years, was spent at the St George’s Cure in Blackstonedge where he fully involved himself in all community activities.

The Rev. Harold Jones, who served in the ordained ministry for 37 years, beginning as a  Supplementary Minister. He entered full-time ministry in 1994 after completing ministerial studies at the United Theological College of the West Indies (UTCWI). Fr. Jones, whose approachable and jovial nature endeared him to congregations across the island, served in Mile Gully, Manchester,  before moving to the Little London/Negril Cure where he was Rector for 12 years.

Sister Norma Thompson for her dedicated service in the forefront of evangelic work across the Diocese for almost 50 years.  Following training overseas, she was commissioned as a Church Army Officer in 1966 and served as social worker and evangelist, not only in many cures in Jamaica, but also in Belize, where she spent six years.  A former Diocesan Director of Education and Youth Work, Sister Norma has impacted many young Jamaicans as a lecturer in Religious Studies and Chaplain at Church Teachers College, Mandeville.

The following organizations received plaques for their outstanding performances in 2014:

St George’s Church, Grand Cayman which was the leading contributor to the Jamaica Church Missionary Society (JCMS), with a sum of more than $479,000.00;

The Church of St John the Baptist, Coleyville, Manchester for having the most outstanding Mothers’ Union Branch;

The St. Gabriel’s Church, May Pen for having the most outstanding Brotherhood of St. Andrew Branch;

The AnglicanYouth Fellowship – St. Andrew as the Area Council of the Year.