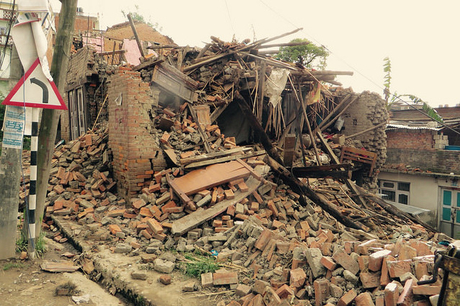 The Rev. Lewis Lew, Dean of Nepal Deanery of the Diocese of Singapore of the Church of the Province of South East Asia, says the effects of the 7.9 Richter scale earthquake that hit Nepal just before mid-day on Saturday, April 25 and the aftershock an hour later have been “devastating.”

More than 4,700 people are known to have died and more than 8,000 have been injured in the massive quake. Dozens of people are also reported to have been killed in neighbouring China and India; and the death toll from the most powerful quake to hit the region in 81 years is likely to rise as information comes in from remote outlying areas of the mountainous country.

“Many buildings in Kathmandu, especially those in old Kathmandu city, have collapsed,” said Dean Lew. “We are [having great difficulty] contacting our churches outside of Kathmandu, as communication is [nearly] totally cut off outside of Kathmandu. We are particularly concerned for our churches near the epicentre, those in Gorkha, Bhaktapur & Dhading districts. I am working with our brothers to see what kind of help is needed and how we can support them.”

Many of the Deanery’s churches are located in villages in the Dhading district which was badly hit by the quake. Buildings, houses, schools and churches have all collapsed. “Nothing is standing,” said one of the local priests.

“The death toll is expected to be high. The survivors are badly shaken. They are waiting for aid. There is a shortage of clean water and food and electricity has been cut off. Tremors are still being felt every half an hour, even in Kathmandu,” said Dean Lew.

Gearing up to respond

Currently, work is being done to assess the situation on the ground in Nepal, according to Dean Lew.  “I hope to get more ground reports on [the needs] and how we can help practically, and also this will give me a chance to consult our Bishops on how we can come alongside our folks in the Deanery,” he said.

Churches and agencies around the Anglican Communion have launched appeals and are preparing for the massive relief response that will be needed. The Anglican Alliance would be standing ready to give support, said Co-Executive Director Rachel Carnegie.