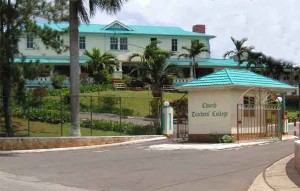 The Church Teachers’ College, in Mandeville, the only tertiary educational institution owned by the Diocese, will launch its 50th Anniversary Celebrations on Sunday, October 5 with a Service at which The Rt. Rev. Howard Gregory, Bishop of Jamaica and The Cayman Islands, will be the Preacher. The Service will be held in St. Matthias’ Chapel on the College campus, starting at 2.30 p.m.

The celebrations are being mounted under the theme: “Celebrating 50 Years of Excellence: Repositioning for the Future.”

The College was established in September 1965 as Mandeville Teachers’ College, in a building which formerly housed the Mayflower Hotel.  It began with the blessing and authority of The Rt. Rev. Percival Gibson, who was then Bishop of Jamaica. The Rt. Rev. Benjamin Vaughan, who was Suffragan Bishop of Mandeville, spearheaded the effort to obtain accommodation for the institution, and he served as the first Chairman of the Board.

The first Acting Principal was Mr. R. Geralt Jones from Wales, whose wife, Mrs. Sue Jones, taught music. The Rev. Orland Lindsay, who served from 1967-1970, and later became Archbishop of the West Indies, was the first permanently-appointed Principal. He was succeeded by the Rev. William Murray (1970-1978) who subsequently served as Bishop of Mandeville, and in that capacity, was also Chairman of the Board.

The College, which was opened with 75 students, now has some 400 persons on roll. It offers training at the Primary, Secondary and Early Childhood levels in response to the need for qualified practitioners in these areas. Its graduates have excelled in their chosen fields and include Anglican clergy, educators, as well as prominent public figures.

For more information on Church Teachers’ College, please visit its website at www.ctc.edu.jm