Luke 24: 13-35
“Affirm the Past, Engage the Present and Envision the Future”
That same hour they got up and returned to Jerusalem; and they found the
eleven and their companions gathered together. They were saying, “The
Lord has risen indeed, and has appeared to Simon!” Then they told what

I suppose that there are some of us who have felt at times like running away from it
all. Running away from all that reminds us of the death of a loved one or from
some other crisis, from our work and even from our faith tradition or worst this
business of Christianity. How many of us have felt like leaving the Anglican
church, and have found ourselves right back? And even now as I speak may not be
too comfortable with where we are at.

Such was the experience of the two disciples on the road to Emmaus. They were
running away from it all; and in the end they ended up where they started,
Jerusalem. Downcast, the two disciples of Jesus made their way from the scene of
death and seeming defeat. Their last three days had seen their hopes dashed as they
witnessed Jesus, their master, unjustly arrested, crucified, and buried. It was too
much to bear. They had to get away from it all. Not even the message from the
women, of the empty tomb seemed to make much different to them and to renew
hopes. The present situation was one of grief and despair.

With drooping shoulders and downcast eyes the two disciples travelled along
discussing the events of the past three days. Journeying along they are joined by a
stranger, which unknown to them is the risen Lord. Through the record of God’s
mighty deeds with Israel, the scriptures, the risen Lord points the disciples to their
past. He reminded them of the words of the prophets as he interpreted the
scriptures and gave meaning to the recent events.

By so doing Jesus affirmed something of their corporate past as a people under
God. Israel’s past, history, was not free of flaws.

Presently the state of our Diocese is not one to boast about. This is not to say there
are not good things happening but even with them the situation is not one we can
be content with. Our problems are not just economic, they are more spiritual and
moral. I know that some feel discouraged, for one reason or the other. Many of us
are trying in our respective congregations; but we are just not seeing the fruits of
our labour. Our efforts seem to be going to the wind. Some who use to walk with
us have left like the men on the road to Emmaus; to where there are ‘success
stories’ and things appear to be happening and happening right.

Our Diocese and the Anglican tradition has a rich history but not without its flaws.
A history we need to affirm, the good as well as the bad. Our history is part of our
nation’s history. We have been a part of what has helped to shape Jamaica, the
good and the bad. The nation cannot deny the church’s involvement, and our
Diocese’s involvement, in health care and education among other activities.

The task of mission is not about trying to recreate what some may see as the
‘golden years,’ a time past. Rather it is to present the gospel in a way that is new
and relevant to the present challenges. This is what ‘the marks of mission’ are
meant to assist us to do, as we engage the present. As a Diocese we have a rich
legacy that we need to affirm, that which has been tested and tried in the crucibles
of history and has stood the test of time. The treasurers of our tradition and
spirituality we must allow to enrich the present as we move forward. The Governor
General has repeatedly asked us “to use what is right about Jamaica to fix what is
wrong with Jamaica”. We have something good which we must continually affirm.

To the disciples on the road to Emmaus, the revelation of the risen Lord gave them
a new vision of themselves, their world and possibilities for the future. Their eyes
were open to new possibilities. They returned to the city, to the centre of things.
They returned to the seat of religious and political power and where their lives
would be most at risk. More importantly, they returned with new minds, hearts,
purpose and vision. It could not be business as usual Christ was risen and had
conquered sin and death, therefore the future is bright with possibilities. The
implicit message was things as they are could not continue and would not remain
forever.

I suggest that if we have experienced the risen Lord then we will envision a new
future under God. This is what the appearance of the risen Lord did for the two and
all Jesus’ disciples. It gave them the permission to dream, to imagine, what the
resurrected body and life beyond the grave could possibly be like.
To envision is to anticipate, it is to imagine, what things could be. To envision the
future is to anticipate new ways of doing things, that are faithful to who we are and
the rich tradition which we have received and have been tested and tried. We need
to envision a future that is not a copy of others, but is authentic to who we are and
to a context that needs to hear the good news afresh. We must envision a future
rooted in the apostolic faith.

We note that it is through a re-interpretation of their roots, scripture, and the
familiar action of Jesus the “Breaking of Bread’ that the disciples eyes were open
to recognise the risen Lord in their company. It is that experience which reenergised
them to face the present which led them to return to Jerusalem. They
returned with a new hope, a new vision, that began a revolution.

We are not running away, but we too will return from whence we came. It is my
hope that we will return to our congregations after this Synod re-energised. We
will return re-energised by our experience of the risen Lord among us with a new
vision; as we hear scripture, break bread and discuss the business of the church
together.

May we be inspired to return to encourage our brothers and sisters to face the
challenges in the name of him who was dead and is alive, Jesus Christ our Lord. 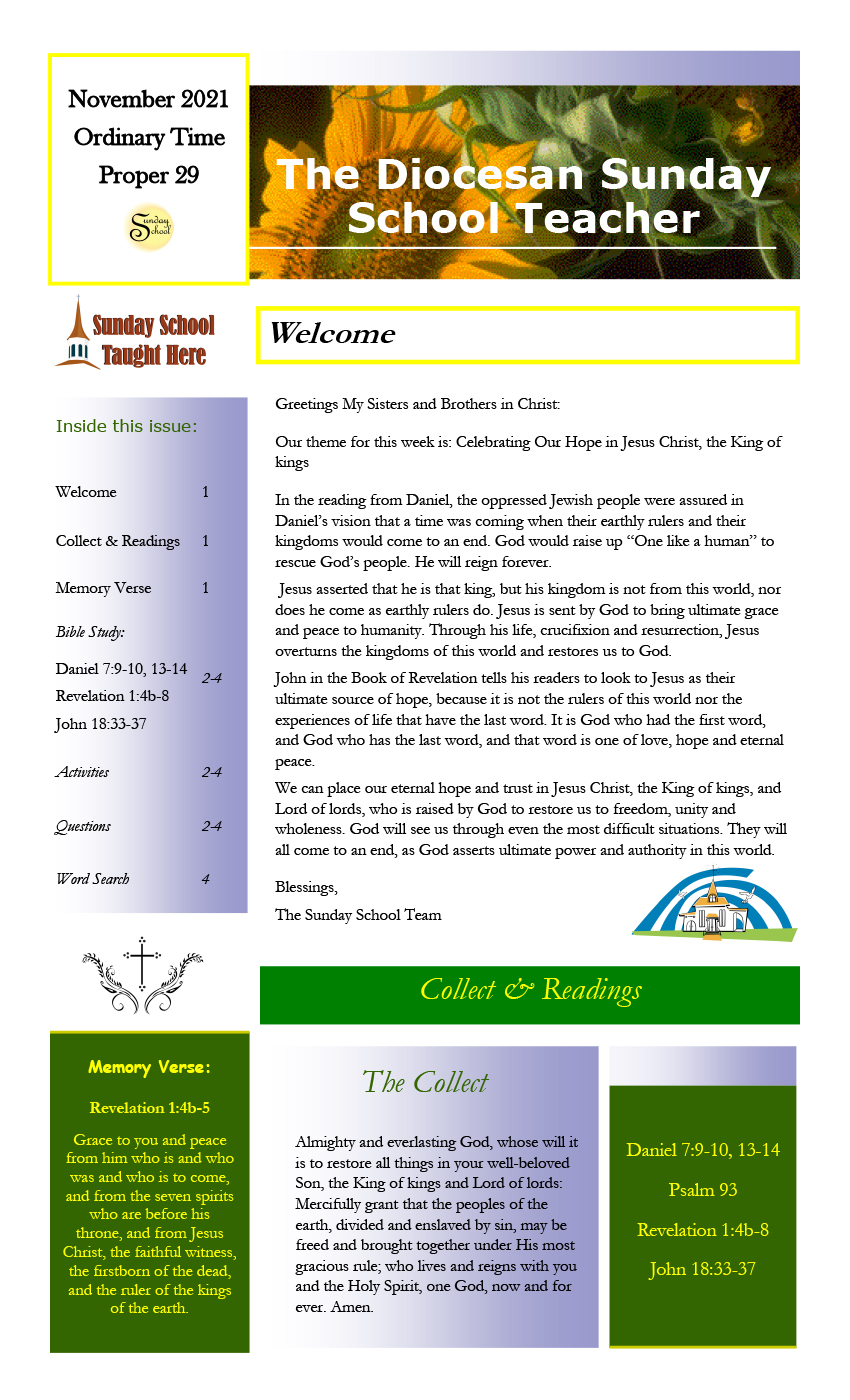