The new Primate of the West Indies will succeed Archbishop John Holder, who retired as Primate and Bishop of Barbados in February 2018. Under the canons of that province, the election of his successor as Primate and Archbishop could not take place until the election of his successor as Bishop of Barbados. On Saturday (26 January) – after a near-year-long election process – Bishop Michael Bruce St John Maxwell was consecrated as the 14th Bishop of Barbados during a special service at the Garfield Sobers Gymnasium in St Michael, ahead of his installation in the island’s St Michael’s Cathedral on Monday. 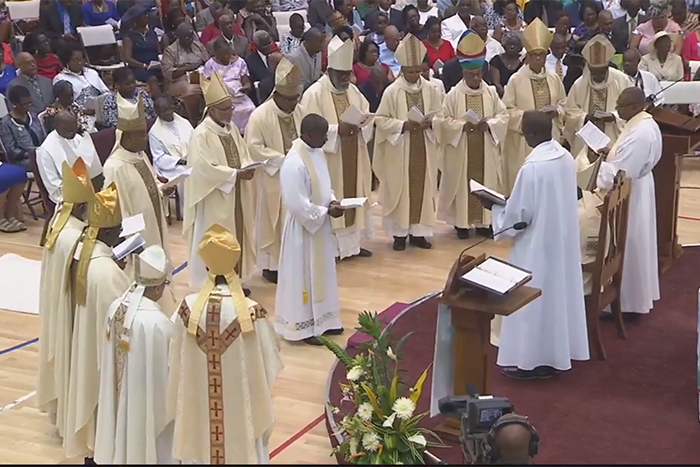 The Bishops of the Church of the Province of the West Indies consecrate Michael Bruce St John Maxwell as the 14th Bishop of Barbados during a special service at the Garfield Sobers Gymnasium in St Michael, on Saturday.
Photo: video grab from a Diocese of Barbados / Caritech Solutions live stream
(click here to watch the video)

Meanwhile, the Anglican Church of Canada has published details of the process for the election of a successor to Archbishop Fred Hiltz, who stands down on 16 July – the last day of the Province’s triennial General Synod meeting. The Synod will meet from 10 – 16 July in Vancouver, British Columbia and will elect a new Primate. Under the canons of the Anglican Church of Canada, the Primate serves as a national Archbishop of Canada and steps down as a diocesan bishop.

The Canadian process of selecting a Primate comes in several phases. In the first, members of the National House of Bishops nominate bishops for the office. In the second, during a meeting of the House of Bishops in March, a series of ballots will take place to create a shortlist containing between three and five names.

The third phase involves “a conversation throughout the whole Church, not only about the nominees, but about the nature of primatial ministry”, Archbishop Fred said in a letter to the Church released yesterday (Tuesday). This leads to the fourth phase: the election of the new Archbishop and Primate in Christ Church Cathedral, Vancouver, on Saturday 13 July.

After a celebration of Holy Communion, the bishops of the Church will withdraw to a separate meeting, where they will pray for the guidance of the Holy Spirit on the lay and clergy members of the Synod, who form the electorate. “Once an election is declared, the bishops join the delegates in welcoming the Primate-elect”, Archbishop Fred said.

“In that short span of a couple days between the election and the installation, the new Primate will be asking for our prayers”, he added. “In my own experience, it is heartening to know that one is remembered daily by name and for need of grace, strength and wisdom in the exercise of this ministry.

“I pray that for our new Primate such respect, good intent and care on the part of the whole Church will be a blessing beyond measure.”

In his letter, Archbishop Fred also called on the Church to pray “for those who wrestle with an invitation and for those who accept it” during the first phase; and, in the second phase, for those on the shortlist, and “for their families, and for their diocesan families.”