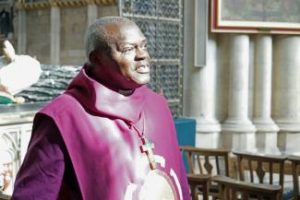 Dr John Sentamu has announced that he will retire from his post as Archbishop of York on 7 June 2020, Trinity Sunday, 3 days prior to his 71st birthday.

Making the announcement the Archbishop said that until that date he will focus on a number of key areas in the Diocese of York and the Northern Province including the launch and embedding of the Diocesan evangelism and discipleship programme ‘Reach, Grow, Sustain.’

There will also be an opportunity to the Archbishop to continue leading the bishops’ missions in the Northern Province of the Church of England in Liverpool, Southwell & Nottingham and in York.

He will continue with the facilitation of conversations for the ‘One Yorkshire’ deal as it plans for a possible Mayoral election in 2020.

He will lead Missions already planned in three Provinces of the Anglican Communion.

Dr Sentamu said: “I will be retiring from my post as Archbishop of York in June 2020. I have decided to announce my retirement now in order to provide the Church of England with the widest possible timeframe to pray, discern with wisdom and insight and put in place a timetable for my successor and to consider fully the work they will be called to do in service to the national church, the Northern Province and the Diocese of York.”

“I am deeply grateful to Her Majesty The Queen for graciously allowing me to continue as Archbishop of York until June 2020 in order to enable me to complete the work to which I have been called.”

“I am full of joy and expectation to see all that God is doing and will be doing in this diocese and in the Northern Province over the coming months.”

First posted on –  The Archbishop of York website
https://www.archbishopofyork.org

An outspoken critic of racism, slavery and injustice, Archbishop Sentamu has also been vocal on issues impacting youth and the family, as well as, global conflict.

In 2007, he and his wife were guests of the Diocese of Jamaica and The Cayman Islands from October 5-12, as the country commemorated the Bi-Centenary of the Abolition of the Trans-Atlantic Slave Trade. On that occasion, he was the Chief Celebrant and Preacher at a Concelebrated Mass at the National Arena. He was also conferred with the Honourary Degree of Doctor of Laws (honoris causa) by The University of The West Indies.

Archbishop and Mrs. Sentamu returned to Jamaica in 2012 as guests of the Government, represented by the Jamaica Tourist Board in coordination with the Diocese, to participate in the Jamaica 50 Independence Celebrations.