“Who will roll the stone away from the entrance of the tomb?” But when they looked up, they saw that the stone, which was very large, had been rolled away. 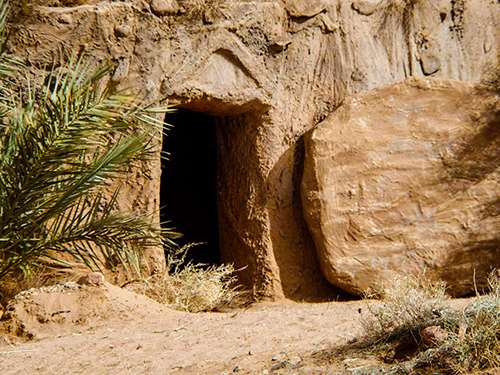 Disciple Mary, along with other faithful women, was first on the scene, after Sabbath observances, to perform duties that would make their Jesus, even in death, lovingly cared for. There was however, one major obstacle…who would remove the stone from the mouth of the tomb? This was no small rock; it was a massive boulder and moving it, would require extraordinary strength. The women make their way to the tomb only to find that by some miraculous means, the giant boulder has been rolled away. What’s more, they’re told, Jesus is no longer dead but very much alive and going ahead of them to Galilee, the town where, with Him, they had shared many special moments.

Like Mary and the others, we too often set out to do good works for the Lord; mingled with our lofty objectives, however, are boulder-like doubts: fears and uncertainties with a paralyzing effect that prevent us looking beyond our limitations to the omnipotence of HIM for whom no-thing is impossible.

Perhaps then, an Easter message to be internalized, within the context of life’s myriad challenges is implied in Romans 8:11: The same Spirit who raised Jesus from the dead [who rolled the boulder from the tomb], being resident in you and me, is able, with our cooperation, to do immeasurably more than we can ask or imagine [cf. Eph. 3:20].  Ponder that a while and hear with Easter joy, that all who open their hearts to Jesus…are more than conquerors.

Think of three things that have been allowed to become major obstacles in your life. As you contemplate each, ask the Holy Spirit to reveal to you, any occurrences in which you have, perhaps through lack of faith, enabled them to become much bigger than they would have been.

What do you sense the Spirit telling you needs to be done, to reduce and ultimately be rid of them; are you prepared to listen…to act?

Gracious God, many boulders stand in the way of my moving towards your heart. Doubts, fears, insecurities and other negative thoughts and behaviours, loom largely before me and…I confess that I am afraid. Fill me with a renewed sense of who you are; that I may trust in your sovereignty and, relying on your omnipotence, not fear the power of any adversary, through Jesus Christ, who lives and reigns with you and the Holy Spirit now and forever, Amen.