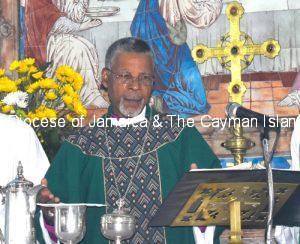 Last night (February 9) a Dinner was held in his honour at the Lloyd Erskine Sandiford Centre. The Toast on behalf of the Province and the House of Bishops was moved by the Rt. Rev. Dr. Howard Gregory, Bishop of Jamaica & The Cayman Islands.

Bishop Gregory noted that, in his eight years as Primate, Archbishop Holder had “contributed to the shaping of the Episcopal and Clerical leadership of the Province in a way that would shape the life of the Church in this Province for generations to come.” He also made special reference to the Archbishop’s biblical scholarship, which is recognised, both in the Caribbean and the wider Anglican Communion where his writings have been printed in various publications.

(Please click here for the full text of the Toast.)

The celebrations will continue tomorrow morning (February 11), when the Diocese of Barbados will host a special Service at the Sir Garfield Sobers Gymnasium starting at 9.00 (Jamaica Time). The Service will be streamed live at: http://bb.caritech.net/church

Archbishop Holder entered the ordained ministry as a Deacon in 1974 and became a priest in 1976. He was consecrated as the 13th Bishop of his native Barbados in 2000; and he became Archbishop of the West Indies in 2009. A graduate of the Barbados-based Codrington College, where he earned the Bachelor of Arts Degree in Theology and the Diploma in Theological Studies, the Archbishop also holds a Master’s Degree in Sacred Theology (STM) from the School of Theology, University of the South. In 1985, he was awarded the Doctor of Philosophy (PhD) from King’s College, London.

A specialist in Old Testament Studies, Archbishop Holder has devoted much of his 44 years in ministry to the training of students at Codrington College.